Between 11.17.2012 to 07.23.2014 Nathan Grayson wrote five articles in which Brice is mentioned or featured to some extent. None of those articles included disclosure of Grayson's personal relationship with Brice, his collaboration with her on one of her creative projects and his plan to collaborate with her on another personal project.

An examination of twitter conversations between Nathan Grayson and Mattie Brice suggests a personal relationship between the two has existed since mid-2012. In a tweet from 27 January 2014 Grayson attests to having been a playtester in one of Brice's games, and a year earlier in 2013 Grayson and Brice made plans to launch a drinking game jam together. Brice provided a more detailed account of the game jam in question here. According to her account, she first came up with the idea for the drinking jam on 2013 and attempted to make it into a reality a couple of years later. It's unknown to me whether or not Grayson was involved in it at the end.

The evidence for the personal and professional ties between Brice and Grayson will be presented in the first part of this post; the second part will list articles in which this conflict of interest was not disclosed in spite of its relevance.

Part 1: Evidence for a personal relationship between Grayson and Brice

Note: Above every screenshot there is a link to the tweets presented in it.

2012 Grayson and Brice hang out together on June

Grayson, Brice and others make plans to hang out with each other in early August 2012 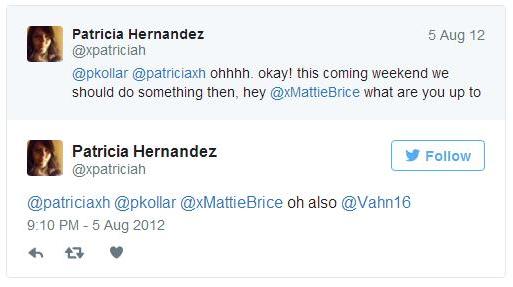 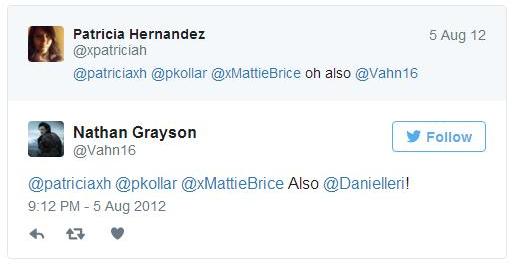 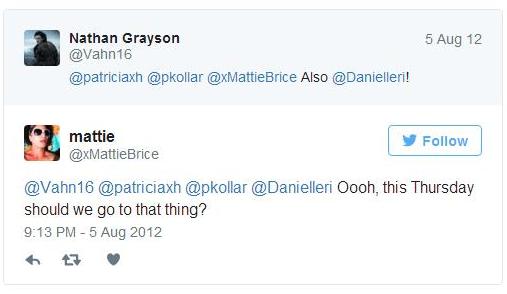 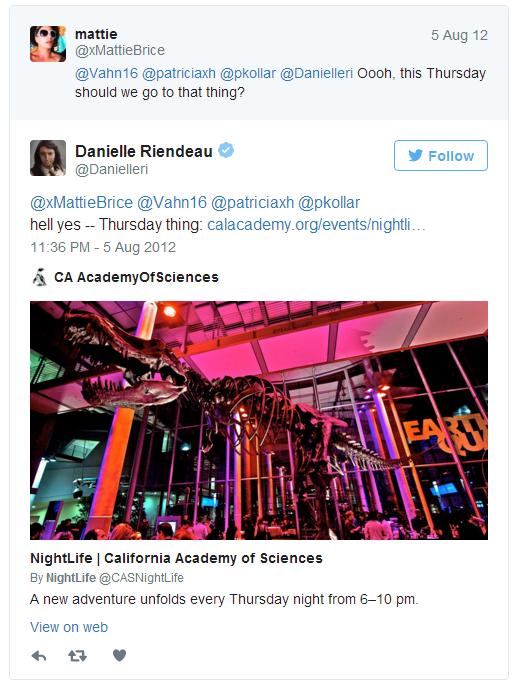 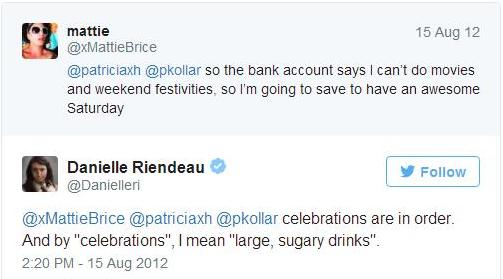 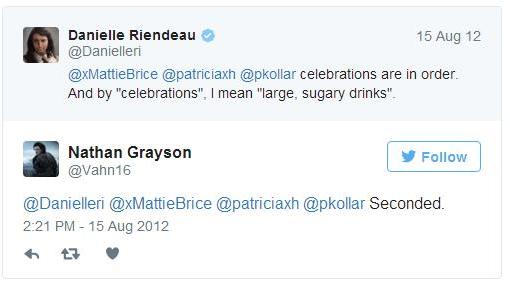 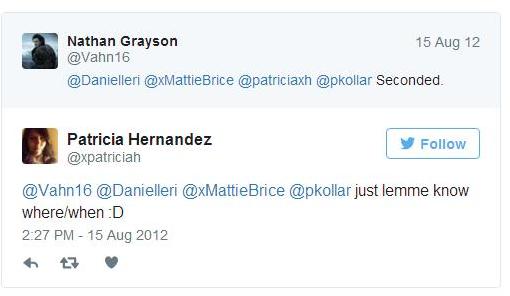 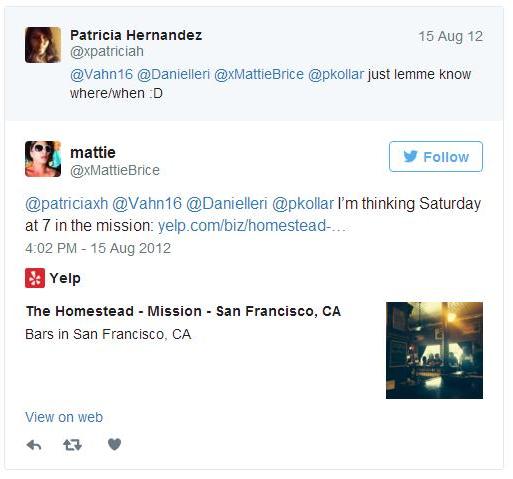 As Brice would later clarify, the celebration was for her one year anniversary of doing game criticism:

:Brice and Grayson have both attested to having been in Seattle in late August 2012

:Apparently they've also hung out together on that day 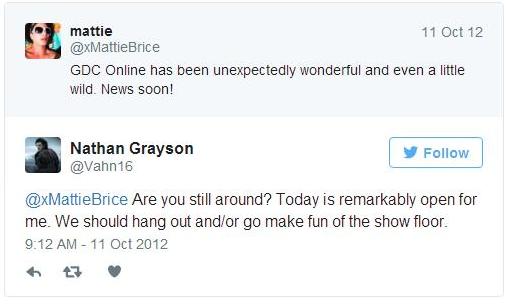 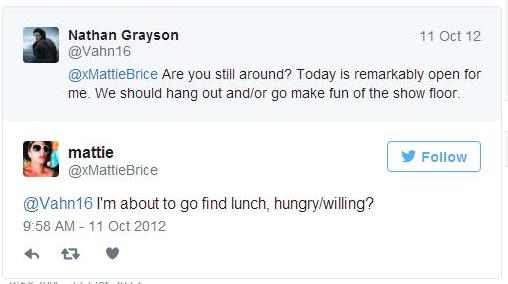 Brice, Grayson and others make plans to hang out with each other on November 2012 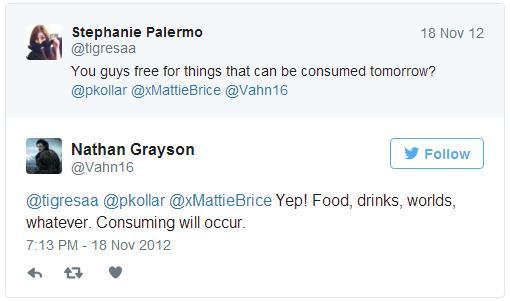 Brice and Grayson are planning to have a drinking game jam, January 2013 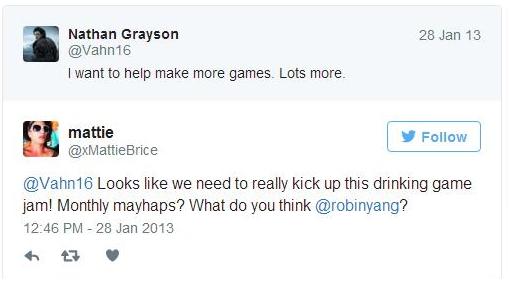 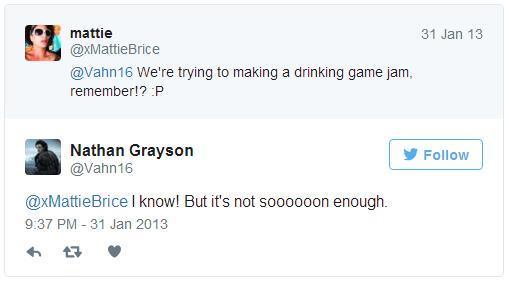 As mentioned in the introduction to this post, Brice states she made her attempt at making this game jam a reality a couple of years after she came up with the idea on 2013. It is unknown to me whether or not Grayson was involved in the game jam itself as he had intended.


Brice, Grayson and others make plans to hang out with each other on March 2013

On 03.30.2013 Brendan Keogh invited several people through twitter to hang out with him, with both Grayson and Brice taking on the offer and Keogh accepting. Instead of embedding the entire chain of tweets in which this conversation occurs, I'll embed only the two relevant ones. Readers who wish to see the twitter thread in full can do so here: 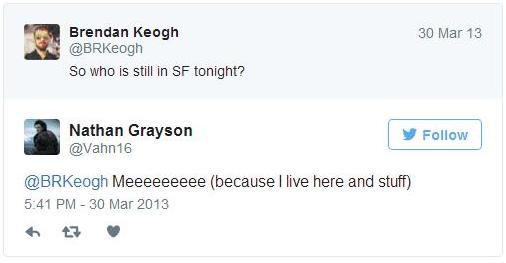 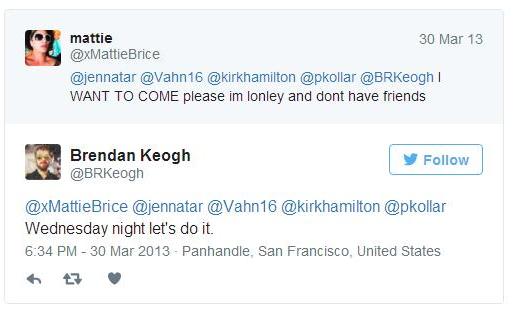 If both Brice and Grayson went to meeting in question as they said they would, this is another case in which the two have hung out together. 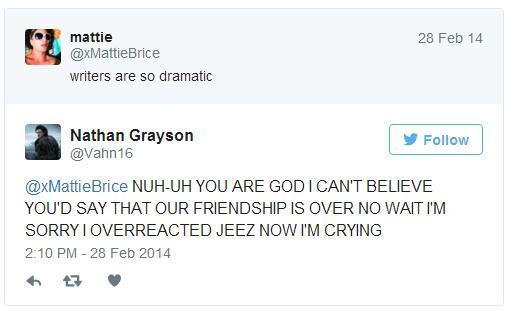 Summary: as seen above, Grayson and Brice have hung out together on several different occasion in what appears to be a non-work related context. In one tweet Brice refers to Grayson as one of her "SF homies", suggesting she sees him in a friend. In another tweet Grayson  facetiously threatens to end of his friendship with Brice, which would imply he already sees her as a friend. Grayson and Brice made plans to start a drinking game jam together (though it's not known whether he was involved in the attempt to make the game jam into a reality) and likewise Grayson admitted to having been involved in one of Brice's games. These collaborations with Brice can be considered a conflict of interests on their own; as the Ethical Journalism Guidebook of the New York Times notes (p. 40, paragraph 135): "Reporters, reviewers, critics and their editors in the Book Review, the Times Magazine and the cultural news, media news and styles departments [...] may not help others develop, market or promote artistic, literary or other creative endeavors." Judging by this standard, Grayson should have not have aided Brice in her game nor should have provided her with coverage afterwards.

11.17.2012: Fullbright On Personal Stories, The FemShep Conundrum (Rock, Paper, Shotgun). Commentary: this is an interview with Steven Gaynor. During the interview Grayson briefly mentions Mattie Brice
04.23.2013: Watch This, Please: GDC’s #1ReasonToBe Panel (RPS). Commentary: as noted in the article, Brice was one of the participants in the #1ResonToBe panel.
04.01.2014: 'Making Games Is Easy. Belonging Is Hard' (Kotaku). Commentary: Quotes an article by Mattie Brice.
04.26.2014: The Video Game Conference That Let Me Say Goodbye To A Departed Friend (Kotaku). Commentary: Article about the event Lost Levels, of which Brice is one of the organizers. Brice herself is mentioned and quoted in the article.
07.23.2014: Love You All (RPS). Commentary: mentions Mattie Brice.

In addition to the above article, in an interview Grayson had with several game developers Brice was mentioned by some of the interviewees. It's debatable to me as to whether or not Grayson should disclose his relationship with Brice when it's not him that is mentioning her but his interviewees. I'm noting it here regardless though so that the readers can make up their own minds on this issue.
פורסם על ידי Let'sDig ב- 22:51